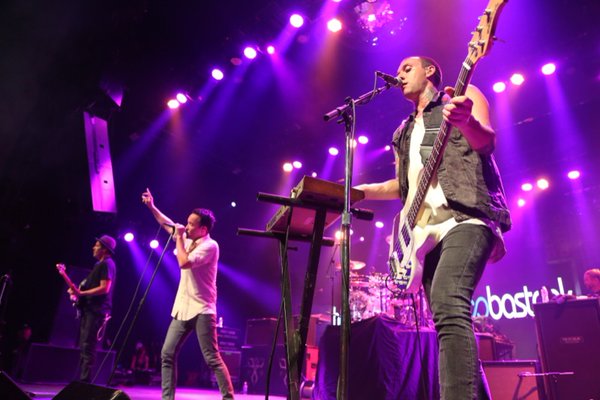 If you listened to Pop/Rock radio in 2004, you probably remember Hoobastank for their hit single, “The Reason.” Lead singer Doug Robb, guitarist Dan Estrin, drummer Chris Hesse, and bassist Jesse Charland have now evolved into a post-grunge sound that’s quite a bit edgier than their early successful hits.

Hoobastank is coming to Richardson, TX to perform at Wildflower! Arts and Music Festival on Friday, May 20, 2016. Before you catch the show, pause and brush up on your Hoobastank history.

They’re all about that bass (player). Jesse Charland is actually the fourth bassist to play with Hoobastank. Markku Lappalainen was the original bassist when the band formed in 1994, followed by Josh Moreau, David Amezcua, and current band member, Jesse Charland.

They make the perfect hype playlist. Hoobastank has been featured on several film soundtracks in the action/adventure genre. Their song “Crawling in the Dark” was featured on the 2nd soundtrack for The Fast and The Furious in 2001. You may also recognize them for their appearances on the soundtracks for Spider-Man 2 and Transformers: Revenge of the Fallen. They even contributed to the video game soundtrack, Halo 2: Volume 1!

The world is their oyster. Over the years, they have achieved international recognition and popularity. Their music video for “The Reason” won the MTV Video Music Award for best rock video in Japan, where they later did an acoustic tour for their album Is This the Day? Their single “Same Direction” made it to No. 9 on the World Modern Rock chart, and broke records in Canada for after spending 21 weeks in the No. 1 spot. They even recorded a Spanish version of “The Reason,” released as “La Razon!”

They’ve lost some sax appeal. The first EP and album by Hoobastank feature saxaphones, creating a more funk metal vibe. However, they decided that their sound was moving in a different direction and they parted ways with saxophonists Derek Kwan and Jeremy Wasser in 1999 and 2000, respectively.

They ain’t afraid of no ghost. On October 30, 2009, they released a cover and music video of the Ghostbusters theme song on YouTube.

They’re on Team USA. Ok, they may not be Olympic athletes, but they played their part in the 2010 Winter Olympics! They contributed the song “Never Be Here Again” to the AT&T Team USA Soundtrack, which raised funds to benefit Team USA.

Their newest album rocks. In 2012, Hoobastank released Fight or Flight. This is their first record after ending their relationship with Island Records, and the first record created by all four current band members.

Make sure that you give it a listen before you catch them at Wildflower! Arts and Music Festival. They perform on the Plaza Stage at Galatyn Park at 9:00 pm on Friday, May 20. There’s no reason to miss out! www.wildflowerfestival.com #WAMFest2016