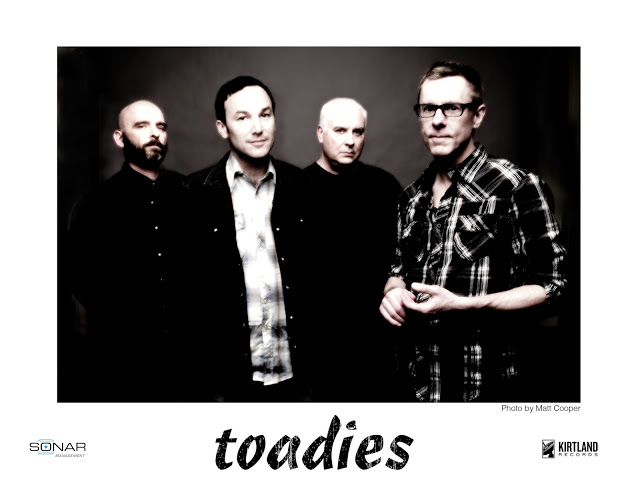 Originally formed in 1989, just down the road in Fort Worth, the Toadies are bringing their unique, high energy brand of alternative rock to Richardson for the Wildflower! Arts and Music Festival. The group retains their original lead vocalist and rhythm guitar player Vaden Todd Lewis, now playing with Mark Reznicek on drums, Clark Vogeler on lead guitar, and Doni Blair on the bass.

The band is most well known for their 1994 smash hit “Possum Kingdom” from the band’s debut album Rubberneck. Over the years, Toadies have toured with some of the biggest acts of the 1990’s, but they have also remained loyal to their Texas home state festivals as a regular act at Edgefest in Dallas and Buzzfest in Houston, and the trend continues this year as they return to #WAMFest2016.

Since their initial release of Rubberneck, the band has released several more full length studio albums, all staying true the sound they helped define in the early 90’s despite growth and lineup changes in the group. Their music has been featured in movies, and was also a playable on Guitar Hero II. The band’s second album Hell Below/Stars Above was released in 2001, however the band had recorded a previously unreleased album, Feeler. The band was broken up shortly after their second release, but thankful only for a brief time. Toadies fans were not left empty handed though, with the band’s first live album release, Best of the Toadies: Live from Paradise. Live from Paradise gave the fans a sense of how the band had mastered high energy shows and unique crowd work in their years of touring.

In 2006, the band reformed for a series of live shows, which lead to a new live album, Rock Show, and their third studio album, No Deliverance, which released in 2008. 2009 also happened to be Toadies first appearance at The Wildflower Arts and Music Festival.

In 2010, the previously shelved album Feeler was finally released under a new label, followed by the 2012 album, Play.Rock.Music. In recent years, the band has released a 20th anniversary version of Rubberneck, and a new album, Heretics. Because Heretics consists of several new versions of previous songs, it is likely that Toadies will bring an exciting new energy to the stage on Saturday, May 20, 2016.

The band is set to rock the Wildflower! Plaza Stage at 10:30 p.m. preceded by Duell at 5:45 p.m., Alien Ant Farm at 7:15 p.m., and Soul Asylum at 8:45 p.m. Wildflower! Arts and Music Festival is May 20-22, 2016 and tickets can be purchased now at local Tom Thumb locations, online at www.wildflowerfestival.com, and daily tickets will be sold at the gate.