BRIAN POUNDS – SEARCHING FOR HIS PLACE IN THE MUSIC INDUSTRY

Brian Pounds is a performer and songwriter with a lot to say about music, especially how the business side of it has become fundamentally inequitable in the way the creators – songwriters in particular – have been largely cut out of the financial loop through online sales and streaming services such as iTunes, Spotify, and other web-based music streaming platforms that are taking huge bites out of the potential revenue stream for songwriters and performers alike.

He’s made the personal, ethical, and business decision to make his music available for sale/download only on his website, completely cutting out the enormous online services mentioned earlier in order to maintain control over the distribution and revenue stream generated from the sale of his own music.

Rather than selling his music through those online services, according to a statement on his website, he’s decided that, “For just about any artist going forward, it’ll probably be necessary to have really good streaming numbers. But I’ve lived with it long enough and I can no longer consciously be a part of the problem. The songs on this record took me years to write. They’re about my 10 years of driving through the night to get home from smoke filled bars. They’re about staying up all night to watch my daughter sleep the first night she was home. They’re about trying to understand the death of my best friend. They’re worth more to me than a click on a website.”

We recently asked Pounds about his music, why he decided to enter his music in the Al Johnson Performing Songwriter Contest, where he’s from and how that shaped his songwriting, who and what inspires him to write his music, and where he sees the industry going with relation to his decision to sell his music on his own website exclusively.

Wildflower! Arts & Music Festival: What was it that made you decide to enter the songwriting competition, and how did you hear about it?

Brian Pounds: Before last year I had never really applied to any songwriting competitions. I used to play sports in high school and I was incredibly competitive, kind of to a fault. And one of the things I’ve always loved about the music industry is the focus on community and support of each other. When I imagined a songwriting “competition,” I always thought it would be a distraction from that community feeling. But I was encouraged to apply to Kerrville by some friends last year and I fell in love with it. While everyone wants to win, it was one of the strongest community feelings I’ve ever been a part of.

After that, I started to seek out more of these competitions and Tom Meny, who’s a former winner, suggested Wildflower to me in passing at one time. A few months later, Grace Pettis, who’s a dear friend and tour partner of mine, sent me an email about the Al Johnson Songwriting Competition that just said “You should enter this.” And I make it a point to do what Grace says most of the time.

WAMFest: You’re originally from Enid, Oklahoma. When did you make the move to Austin, and what precipitated that move? What is the music scene there or something else entirely?

Pounds: I was born in Enid, but I left when I was 9 months old. I grew up mainly in the suburbs of Houston. After high school I had a choice to go to Berklee School of Music or follow a girl to Oklahoma University in Norman. Being a young, dumb kid in love, I chose the girl and we broke up pretty soon after I arrived. I spent the entire semester being miserable. My heart was broken, but more than that, I felt like I was taking the easy way out to try and avoid the life of a struggling musician. I was 19 years old and terrified I’d end up playing on the street for change. Finally, on the last day of the semester I called my parents and told them I was moving to Austin to play music. I don’t think I’ve ever felt so relieved. I immediately fell in love with this city.

WAMFest: How would you describe your own music, and what is it about your music that separates it from all the others in your genre?

Pounds: The genres keep changing so it’s hard to keep up with. I would say I play folk music – and that’s a relatively new development. I always thought I played alt-country, or Americana, or even Texas country. I always imagined “folk music” had to be Woody Guthrie or Bob Dylan. I love both of those writers, but I saw myself as more of a James Taylor type songwriter, and people always just called that “70’s Songwriter” music. But when I got to Kerrville last year and sat in on those circles, I realized ‘folk’ just means honesty, or coming to terms with your life experiences. At least that’s what it means to me.

And that having been said, I don’t know that my music is separate from others in the genre. I kind of hope it’s not. There’s the old saying that “good writers borrow, great writers steal.” I think that’s a crass characterization of a beautiful process that happens in songwriting. There are common influences and experiences that tie us all together, and the best songs recognize those influences, and hope to build on them. It’s almost as if the songwriters that came before us are saying “Look. We built this road. And it’s a beautiful road that goes to this place. But it’s not there yet and it’s your turn to start building the road where we left off.” In that sense, I don’t want to be apart from the people of my genre. I just want to help build the road. 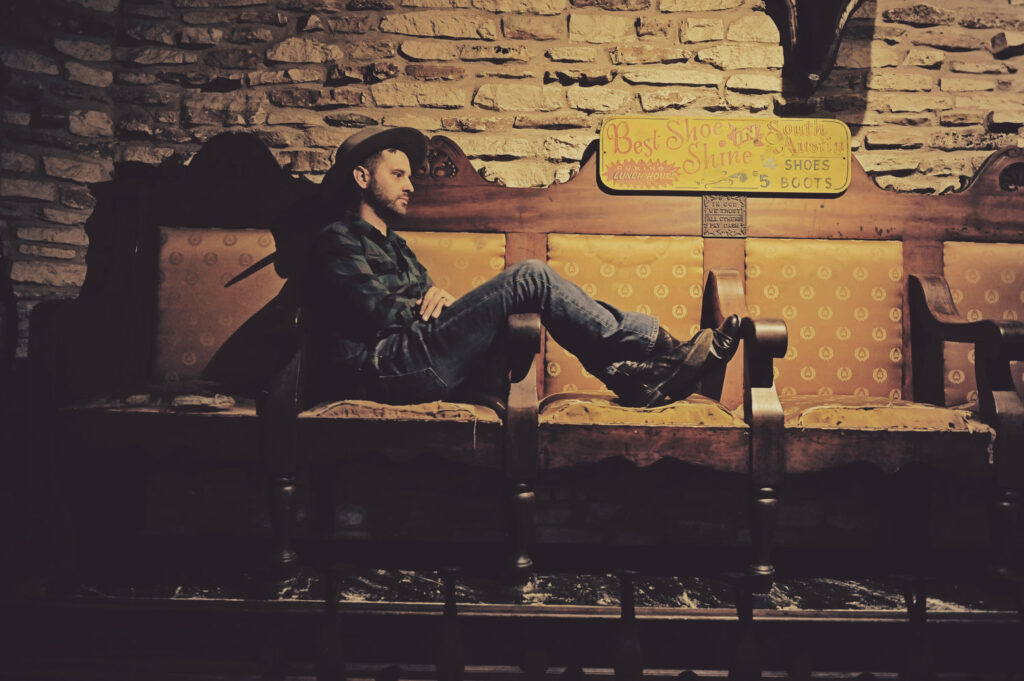 WAMFest: What is it that draws you towards writing and performing acoustic music?

Pounds: Being a perfectionist, a control freak.

WAMFest: Who would you point towards as your musical inspiration and influences? Would they surprise us?

Pounds: I already mentioned James Taylor. I like that he seems very deliberate in what he does. His style of playing requires concentration and practice. It wasn’t just that he was a unique guy that happened to have a different perspective on things when he started writing. Everything he does always seems to be on purpose, and that strikes me as someone who is a master at what he does.

The two records that changed the way I wrote songs were “Heartbreaker” by Ryan Adams, and “In the Wee Small Hours of the Morning” by Frank Sinatra. Those were the two records where I discovered every single song on a CD can be sad.

WAMFest: What do you look for in a subject that inspires you to write about it? Are there favorite subjects that you like to write about more than others?

Pounds: I personally have never written an honest “happy” song. I’ve never been in the middle of something I love to stop and write a song about it. But I’ve definitely had moments of fear and/or despair and needed that outlet. I don’t mean to demean happy songs. Motown is happy hit after happy hit and those are possibly the best songs in the world. But for me, I’ve always needed music the most when I was down. That’s where I’ve always really felt it. Also, I’ve been listening to a lot of Guy Clark lately.

WAMFest: What one specific thing would you want to convey about yourself and your music to your audience if you could communicate directly with them now, and why would that one thing be so important to you that they understand?

1) The writers don’t get paid. And for great writers to be able to write great songs, and survive despite the massive amount of noise that’s being generated right now, they need to make a living. Without a real fix to the business model of the music industry, great writers will become extinct.

2) You didn’t pay for the music. Things are given worth by the value you place in them. A chair that an antique store will only give you $10 for may have been the chair your grandma rocked you to sleep in as a baby. If $10 a month is all your paying for music, then that’s all it’s ever going to be worth to you. Great music is complicated and can take time to unfold. You may hear something once and hate it – for whatever reason. But then it grows on you, seeps into your bones. And that song you hate becomes the song you love. But with Spotify, if you don’t like a song in the first 30 seconds, you skip it, because there are all the rest of the songs on the planet to listen to. Great music is complicated, and streaming breeds uncomplicated music.

Saturday, May 19, 2018 Brian Pounds will compete in the Al Johnson Performing Songwriter Contest at 11:30 a.m. on the United Healthcare Singer Songwriter Stage in the Eisemann Center. Brian is also set to perform on Friday, May 18, 2018 at 7:30 p.m. on the CityLine Stage at the 26th Wildflower! Arts & Music Festival. Tickets available www.wildflowerfestival.com and more information about the contest: https://wildflowerfestival.com/songwriter-contest/.