THE MAN BEHIND THE WILDFLOWER! MURALS – CHARLES CLAUDET III

Measuring 144 ft long and 8 ft high, this Wildflower! Arts and Music Festival mural is one of several murals and an annual rockstar project. Behind the mural is a leather goods designer for Bioworld Merchandising who happens to moonlight as a masterful artist every May. Charles Claudet III has been painting the murals since 2007 and says, “This is something that I look forward to every year.”

The theme of the murals is based around the Wildflower! poster and Claudet creates a rough layout on his computer to keep the application process on track. “It usually takes 10-12 hours a day for four straight days to complete the three murals. In the last few years Stephen Bates and Daniel Lipschitz have joined me in the fun after they finish their day jobs,” explains Claudet.

Sherwin Williams generously donates the supplies for the mural and Claudet prefers to use exterior satin finish house paints with brushes and rollers. The plywood panels are taken out of storage and painted over and over again each year. Given the time and uniqueness it seems natural to want to preserve the murals forever, but this artist is not sentimentally attached.

“I enjoy the idea that they are there for the festival and replaced by another mural the following year.” Charles Claudet III

Selecting a favorite could prove challenging for the public, but Claudet says he fondly recalls the Kidz Korner mural from 2007 and western theme from 2010. Born and raised in New Orleans, this artist aspires to paint a mural for their annual Jazz & Heritage Festival or the Festival International de Louisiane in Lafayette where he attended college. Claudet lives in Plano with his wife Christine and charming four-year old daughter Peyton. Together as a family they contribute time, talent, and their passion of the arts for a collective end result of exquisitely painted Wildflower! murals.

Claudet will begin painting the 2016 murals mid-May and the panels are scheduled to be installed in the VIP area on Friday May 20th by the festival crew. “Friends of the Festival” receive rock star treatment in the VIP area and advance registration is available online: https://wildflowerfestival.com/friendsoffestival.html.

Wildlfower! Arts and Music Festival will be held May 20-22, 2016 and the other murals will be on display in the Kidz Korner. Ticket holders are encouraged to snap and share a wild picture of themselves with any of the murals using the official hashtag #WAMFest2016 and tagging on social media. General tickets are $25 single day or $40 three-day pass and may be purchased at metroplex Tom Thumb stores or www.wildflowerfestival.com. 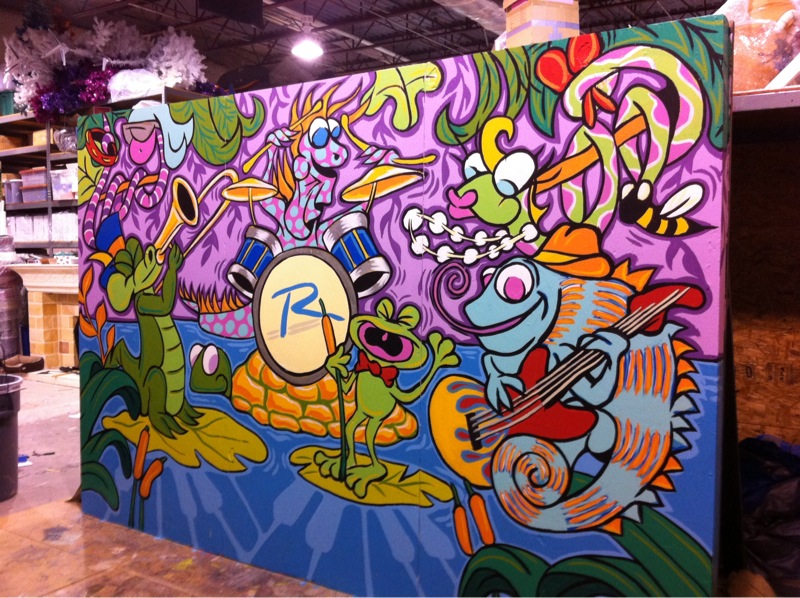